Stickley, Morris and Tiffany represent the best of the arts and crafts furniture and home design movement that gained prominence at the end of the 18th century.

A brief history of the Arts and Crafts Furniture Movement

The Arts and Crafts Movement has its origins in England, but it was emulated in America (and then in Canada and Australia). It was a furniture and design movement that flourished for only a short time – between the years 1880 and 1910, and yet it forever changed the way architects, artists and furniture builders think about form, function and design.

Artist and writer William Morris is credited with beginning the movement.  He was inspired by the writings of poet, author and art critic, John Ruskin.

Ruskin’s most famous principal regarding art that it should “go to nature in all singleness of heart, rejecting nothing and selecting nothing.”

Ruskin and Morris both felt that art – (which to them included furniture, architecture and design), should communicate truth above all things.

Over time, the arts and crafts movement in England became the polar opposite of what would happen in the U.S. – it evolved into something entirely different.

Craftsmanship in England was prized, but the furniture that was created were extremely detailed, lavishly decorated, exquisitely beautiful pieces… But so outrageously expensive that only the wealthiest people could afford them.  Morris wanted to change that.

Stickley Goes to England and Discovers the Arts and Crafts Movement.

In 1898, Gustav Stickley (the oldest of the five Stickley brothers), traveled to England, where he met the men who pioneered the new design movement – William Morris, John Ruskin, Rennie Mackintosh and Josef Hoffman.

He took to heart their ideals: that what made a ‘good design’ was irrevocably tied to their views of what made a ‘good society’… They despised the mass-produced goods of the day, which were often of low-quality and poor design, and where craftsman weren’t respected for their skill or abilities.

Instead, they envisioned a society where a worker – a craftsman – could take pride in his work, where he had the freedom to utilize his skills, create his own designs, and receive a fair payment for the work he did.  They wanted to return to design that was “for the people and by the people, and a source of pleasure to the maker and the user.”

This was an ideal which was picked up and emulated by craftsman in Canada and Australia too.

Arts and Crafts Furniture Movement in the U.S. – Dreams of an Ideal Society

No one promoted the Arts and Crafts Furniture ideal better than furniture designer, Gustav Stickley. While he too despised the poorly-made, mass-produced furniture, he also admired some of the techniques used by the factories to streamline the production process.

After he returned home, he found a way to combine the two and create the best of both worlds. Stickley designed his furniture with clean, simple lines and used the best materials (usually oak) to create beautiful, serviceable furniture that was built to last. His first production line where he adapted the methods from the old guilds, was at ‘The United Crafts’ and later the Craftsman Workshops in Chicago.

His ‘secret’ was in using factory methods to manufacture the basic components – and then hiring true craftsmen of the day, to assemble and customise each piece, and allowed him to sell his furniture in huge quantities to the newly created ‘middle class’ group of consumers who wanted quality furniture that was beautiful and affordable.

His designs were promoted through his own catalogue, ‘The Craftsman’ which was widely distributed from 1901 – 1916.  Articles offered simple yet colourful decorating ideas, and included illustrations of how to combine the furniture with decorative rugs and pottery. Each issue underlined the entire arts and crafts furniture philosophy of creating beautiful objects that enhanced the life of the user – (and, of course, provided a living for the craftsman)…

Today Stickley’s furniture is still sought out by collectors, and the Stickley factory still turns out reproductions that are tomorrow’s collector’s items.

Heirloom arts and crafts furniture are some of the most highly sought-out items by collectors.

In fact,  turn on your television to any one of the popular ‘antiques shows’, and you’re likely to see William Morris designs, Louis Comfort Tiffany glass and Gustav Stickley furniture being featured – in fact, there are often segments dedicated just to arts and crafts furniture.  Collectors are always excited and thrilled with the high estimates of the value of these heirloom pieces.

The designs, ideas, furniture pieces and soft furnishings are highly sought out by non-collectors as well – people who have discriminating tastes and an eye for beauty and quality… and it’s no wonder.

In today’s furniture world of ‘flat-pack’, do-it-yourself pieces or mass-produced flimsy laminates, the ideals and actual designs of Stickley live on in the quality, real wood arts and crafts furniture at Stickley Toronto.

Come in and see Stickley’s legacy at our stores, 561 and 567 Mount Pleasant Road, Toronto. 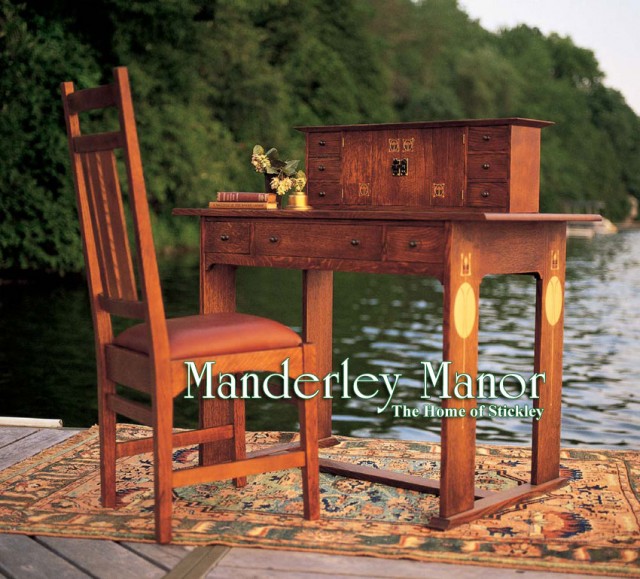