It all started with five brothers: Gustav, Leopold, Charles, Albert, and John George Stickley. Gustav alone is often thought to have introduced the innovative Craftsman style (better known today as Mission). However, all five Stickleys contributed to the founding of the Arts & Crafts movement in America.

They were inspired by (and adopted) 15th century Dutch painter Jan van Eyck’s motto “Als ik Kan”, which loosely translates as “To the Best of my Ability”. This high-minded corporate philosophy soon resulted in furniture built for both beauty and function, using the finest materials, strongest joinery, and most radiant finishes. Their ground-breaking designs relied on neither gratuitous embellishment nor the whims of fashion; they were meant to become both useful and beautiful improvements to the day-to-day fabric of domestic family life.

By the late 1890’s prosperous America was awash in mass produced, poorly-made, mediocre consumer goods, particularly furniture. Then, in 1900, the Stickley brothers introduced the immediately popular Craftsman (or Mission) style, single-handedly transforming the very atmosphere of the American household. Immediately popular, these ground-breaking designs eased America out of late Victorian formality with a freshness of style and aesthetic that helped hugely to usher in the new century.

The Stickley brothers combined technique and the highest quality materials with innovative and exciting designs, including new forms that appealed to the American public. This was furniture that was practical and long-lasting — and fashionable. 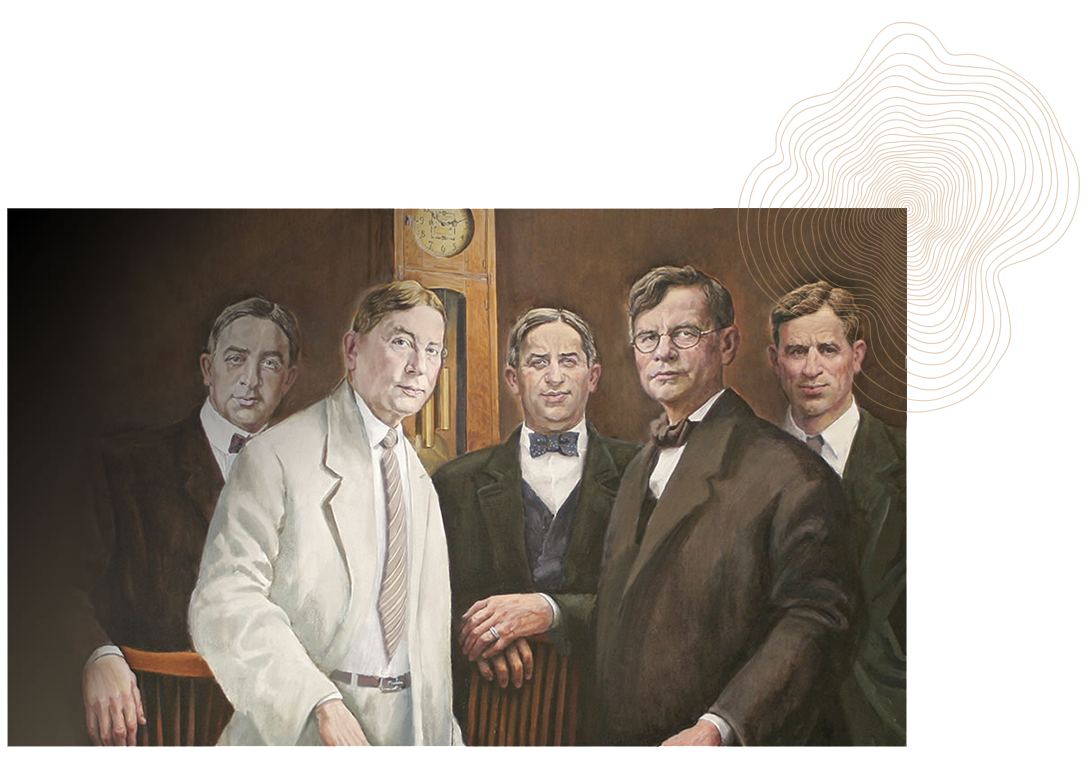 In the 1920’s, Leopold Stickley introduced the Cherry Valley Collection, a Colonial-inspired collection which proudly emulated the honourable traditions of early American life. After the Russian Revolution, America had started to look back into its history, distancing itself from anything that hinted of socialist sympathies.

During the 1970’s, interest and respect for handcrafted furniture waned, and the future of Stickley Furniture seemed bleak.

Yet Stickley was not to be abandoned – there were those who believed passionately in well-crafted furniture, particularly E.J. Audi, for years the leading seller of Stickley’s furniture in his Manhattan showroom.

His son, Alfred, and Alfred’s wife Aminy, were determined that the Stickley name, and its association with valued, unsurpassed craftsmanship, should live on, and not just as a memory. The Audi’s purchased the Stickley factory from Leopold Stickley’s widow, just as it faced closure. To the employees that remained Alfred gave his word that he would support them: “If you stick with me, I’ll stick with you, and we’re going to make this place move”. With this optimism and these employees (and many years of inspired labour) Stickley grew again and thrived, going on to become one of the most revered and successful furniture makers in American history. And all this achieved while continuing to manufacture in the continental United States.

In the fall of 2007, Alfred Audi sadly passed away. The Stickley legacy is continued by his wife, Aminy, and son Edward.

CASEGOODS
Hand craftsmanship and the finest materials (along with inspired design) distinguish Stickley furniture from other furniture lines. For example, each piece is built using the very best furniture-grade woods, especially quarter-sawn white oak, wild black cherry, American walnut and ash, and solid mahogany. (And Stickley have been responsibly sourcing their woods since day one, both locally and internationally, long before any ethical or legal requirements.) Then, an exceptional degree of hands-on work by skilled individual craftspeople is made possible in part by the use of ultra-efficient CNC cutting and trimming equipment.,

Construction and final assembly depend upon proven traditional joinery techniques such as,

Every Stickley piece is then finished to the highest standard using the most environmentally-friendly lacquers, clear dyes and waxes. Hand sanding and hand rubbing then ensure the most lustrous finishes to be found anywhere, old or new. 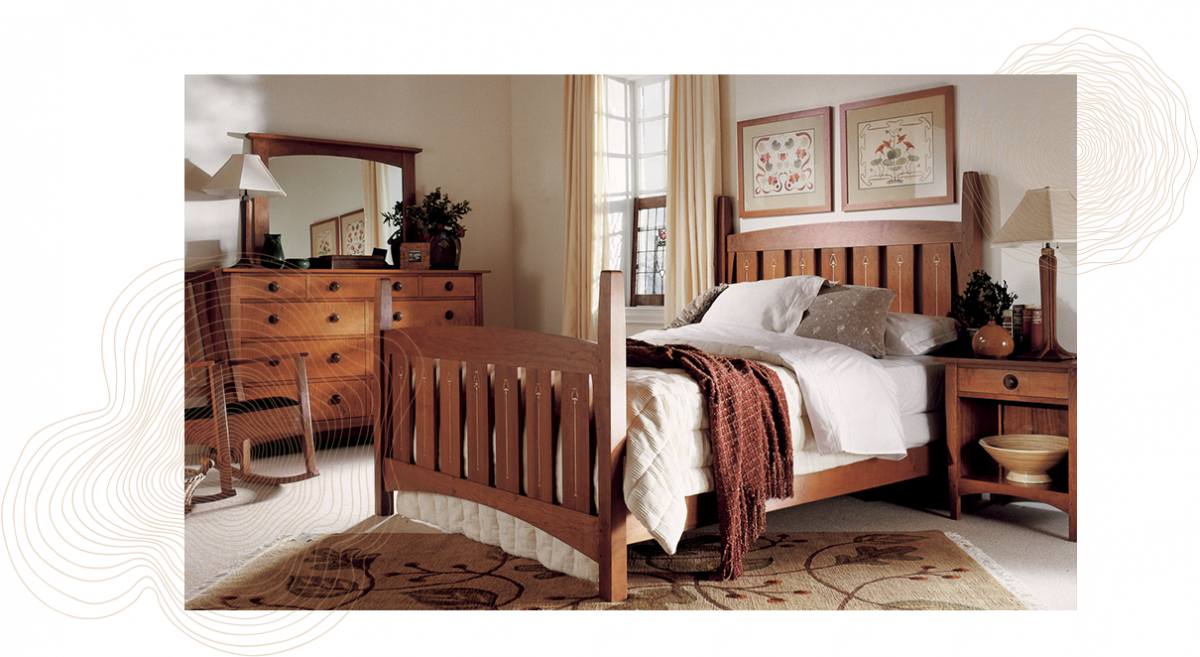 STICKLEY FINE UPHOLSTERY
Stickley is renowned for the consistent high quality of its sofas, chairs and ottomans. And whether sleek and minimal, casual contemporary, timeless elegance or anything in between, the emphasis is always on comfort and beauty that really last. Stickley Fine Upholstery is offered in a wide variety of fabrics and leathers – fine coverings that independent re-upholstery professionals regularly purchase from Stickley for their discriminating clients.

When considering upholstered furniture it is important to realize what seemingly minor aspects of content and construction contribute to both lasting appearance and a long useful life. Many of these details remain unseen within the frame’s infrastructure, yet help hugely to distinguish truly “fine” upholstery from everything else; details such as spring quality (high-carbon steel), frame material (double-doweled 5/4 kiln-dried maple) and brand-name components (muslin-covered Marshall Unit back coils), to name but a few.

Construction and finishing details are the work of Stickley’s renowned upholstery craftspeople. Their skill and efficiency allow a meticulous attention to assembly and tailoring that is seldom seen anywhere else. For example:

– Seat springs are still secured using eight separate hand-tied knots (rather than simple loops) of high-quality tying twine. This old-world process takes longer but contributes to an unsurpassed comfort that lasts a lifetime.
– Skirts are fully mitred and fully lined, thereby draping freely and without unsightly bulk and bulge.
– Centre-matching and especially Flow-matching (of patterned fabrics) require the highest degree of skill and patience, and result in the most exclusive and beautiful tailoring achievements.

So, Traditional to Transitional to on-trend Modern and more — whichever best complements your personal taste, home and lifestyle, Stickley Fine Upholstery offers the very best, at the best value.

For many years Stickley has been a leader-by-example when it comes to sustainability and environmental impact. What many others talk about doing, Stickley has done, often for a very long time. Recognition and awards from within and without the manufacturing sector of the North-American economy attest to the results. Stickley’s successes range from the very early establishment of comprehensive recycling programs, to major investments in energy efficiency (such as lighting and machinery) above and beyond those required by law. And since its earliest days Stickley has not only sustainably managed its own domestic timber stands but has encouraged local authorities and other suppliers to do the same. Such pioneering efforts have undoubtedly helped to more than double the forested area of the North-Eastern United States over the last century.

Here is one small but well-known example of Stickley’s in-house efforts. All wood waste generated from production is used as an alternative to fossil fuels; wood by-products heat the entire 400,000 sq.ft. main factory in Manlius N.Y. All excess wood waste is then processed by a local pellet manufacturer and used primarily as a residential heating fuel. In Stickley’s production process, defective or small pieces of scrap wood that do not go into furniture are given to employees. During the cold New York State winters, many employees heat their homes or fuel their fireplaces with this clean, renewable resource. And sawdust created during production is a prized resource for local farmers, who use it to soften and clean their livestock stalls.

Just as important, Stickley often met and exceeded modern certification standards for industrial hygiene (such as C.A.R.B.) long before they were formulated. So, while today’s furniture buyer is amply-justified in her concern about “off-gassing” and the chemical composition of stains, lacquers, sealers, and various upholstery components, as a Stickley customer she can breathe easy.
And STICKLEY remains an oft-cited example of how what is good for the environment can also be good for business.