Why Stickley Furniture Is Ideal for Your home. 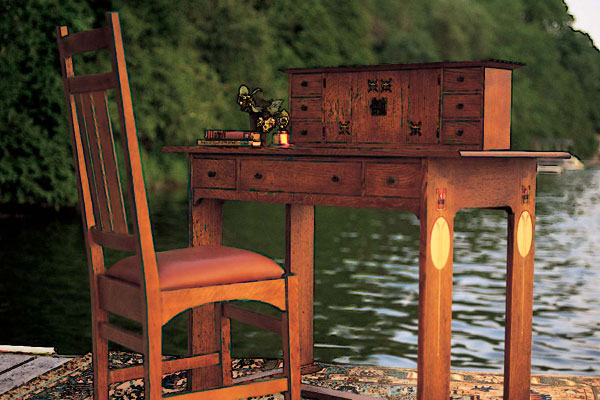 Just as these ideals were behind the mission of the five Stickley brothers’ different furniture and design efforts, so they steer today’s Stickley upholstery and solid wood furniture offerings.

The original Stickley furniture store was started by brothers Leopold and John George Stickely in 1900.  They named their store ‘L and J.G. Stickley, Inc.’  The best-known of the brothers, Gustav, started his career as a furniture builder making copies of Victorian furniture, however, his heart – and his talent – were in the clean, unadorned lines of the furniture from the British Arts and Crafts movement.  Gustav traveled to England in 1898, where he became enthralled with the Arts and Crafts movement and the movement’s ideal of a return to handcrafted styles and a simpler life away from the factories and urbanized, mechanized, mass-produced society.

Stickley, who was then 41, returned home to Eastwood New York, and set up his now-famous ‘Craftsmen Shops’ in 1898, where he began creating his own furniture designs. He was drawn to the beauty of natural unadorned wood – hand polished to a sheen – combined with high-grained leather. His distinctive designs offered clean lines and rectilinear forms and featured mortise and tenon and dovetail joints, which doubled as simple decoration. He labeled his original pieces with his name and shopmark, which was a small joiner’s compass, inset with the slogan ‘Ais ik kan’ -which translates from Flemish as ‘To the best of my ability”. He preferred working with natural white oak, because of its ‘honesty’ and strength. Stickley’s furniture – which soon came to be called ‘Mission Oak’ because of the popularity of California’s mission architecture style in the early 1900s – and, perhaps, because it resembled the furniture used in the missions, gained popularity quickly. Many pieces became ‘must haves’ in the homes of the newly created middle class in America.

The Settle – Mission Furniture at its Finest

Consider, for example, the ‘settle’ – a collector’s item currently gracing a bay window at the Gustav Stickley home in upper New York State.

A settle is an extremely old furniture idea with examples found as far back as 10th century Europe. A settle is a moveable, wooden bench with arms and a back, and was large enough to seat 3.

Built of solid oak or other hard woods, early settles were standard pieces of furniture in taverns and inns because of their durability, weight, and solidness. By the 16th century, as it became more popular, and began showing up in the finest homes, the settle was upholstered to improve its look and make it more comfortable for the ladies.

Brothers Gustav and Leopold Stickley each created separate visions of the settle. It was only natural that they should look look to earlier furniture styles as arts and crafts designers drew on guild times for inspiration.

One Gustav Stickley-inspired interpretation of the settle, the ‘Gus Storage Settle with Hinged Seat’, is quite close to the oldest known original designs. Gustav most noticeably altered the back and sides.

Attracted by the long, low lines of the mid-western prairie homes of his time, Leopold Stickley designed the Prairie Settle and also the Prairie Chair, a settle for one person.

Some of the Stickley Prairie examples feature spindles and others offer the beloved mission panels.

Harvey Ellis (a writer-cum-designer who worked with Gustav), designed a settle of his own, and in his version he created unique inlay patterns using English sycamore, maple, cherry, and other woods which distinguished the Stickley pieces from copycats.

We invite you to settle in a settle and consider which one to add to your home at our stores, Stickley Toronto and Manderley Manor, 561 and 567 Mount Pleasant Road, Toronto.