By the time Gustav Stickley entered the arts and crafts movement, it was already a well-established international phenomenon.  However, it didn’t take long before Stickley Arts and Crafts – the furniture, metalworks and textiles were considered leaders of the American movement.

Today Stickley Arts and Crafts are still an integral and sought-after part of home and office decorating in fine homes around the world.

One of Gustav Stickley’s main influences for later production of all Stickley Arts and Crafts was Englishman John Ruskin (1819 – 1900).  Ruskin was an outspoken critic of Britain’s thriving industrial system.  He hated what he considered the poor quality of machine-made goods, and was know to routinely speak out against products that were created more for show than for daily use.

One of the main missions of Stickley Arts and Crafts style furniture, textiles and metal works was that people should “have nothing in your home that isn’t both useful and beautiful”.

One of the main points Ruskin often made was that mass-produced goods meant that craftspeople and artisans became ‘slaves to machines’, which he felt robbed them of the pleasure of creating them and meant people wouldn’t have access to quality, hand-made items.

William Morris was one of the first entrepreneurs of the day to put Ruskin’s reformist policies into actual practice.  In 1861, Morris & Company began producing well-designed, and mostly created by hand textiles, wallpapers, stained glass, and furniture.

Morris once said of his furniture, “So I say our furniture should be good citizens’ furniture, solid and well made in workmanship…. Also, except for very movable things like chairs, it should be made of timber rather than walking-sticks.”

It was perhaps because of Morris’ many speeches and writings that the definition of art was eventually expanded to include more traditional handicrafts – and was the basis of many of Stickley Arts and Crafts ideas and products.

From the beginning, Stickley Arts and Crafts expressed Morris’ ideas about art, form, design and color.  Stickley furniture was “good citizens’ furniture” which meant it was well-made, and sturdy while being beautifully designed and decorated.

Stickley’s emphasis on the details of the joinery… the exposed tenons and key joints, the visible dowels, and the hand-rubbed beauty of the wood itself – is what gave every piece its hand-made look and quality. At the same time, it de-emphasized the machine process of Stickley’s arts and crafts furniture line.  This was something many people saw as a huge ‘do what I say, not what I do’ ideology, and caused some discontent among rivals.

But in reality, Stickley Arts and Crafts furniture and textiles represented an almost radical leap in showing how the two – man and machine – could work in harmony, without sacrificing either the craft or the efficiency of either.

Gustav Stickley took the ideals of the arts and crafts movement very seriously and his goal was always to provide the highest quality products and make them affordable to the widest possible audience.  And he succeeded, perhaps beyond his wildest dreams with Stickley Arts and Crafts. 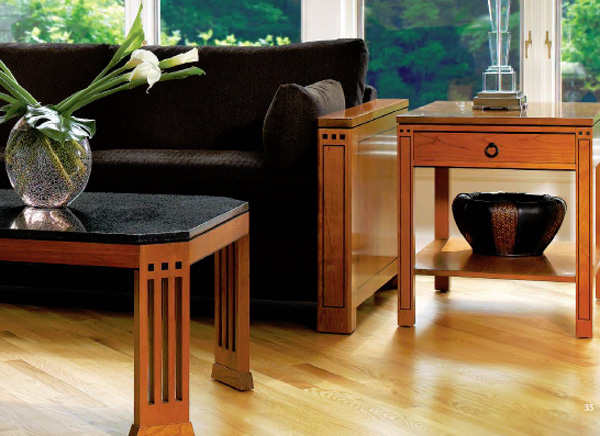